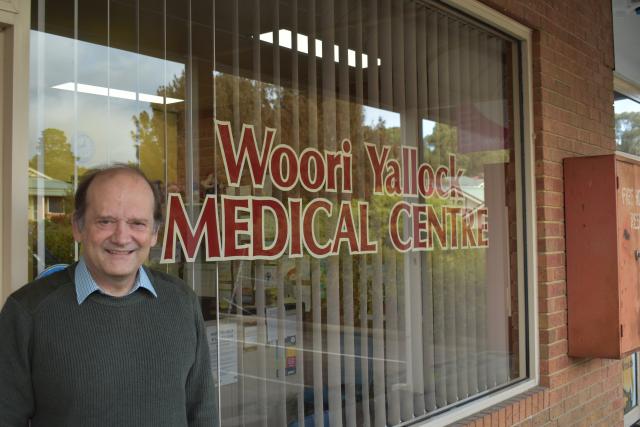 Woori Yallock residents are likely used to the friendly face of Dr Andrew Kirwan, who has been the GP at Woori Yallock Medical Centre for over 35 years. Picture: Callum Ludwig.

Dr Kirwan recently received a Length of Service Award from the Rural Workforce Agency Victoria to recognise the outstanding healthcare he has provided to the community.

Dr Kirwan said it’s an honour to have recognition.

“I’ve just been doing a job and I’ve stuck it out, working in the community has been a privilege really, getting involved with the community was one of the reasons I wanted to move out to a semi-rural area and that’s what I’ve done over 35 years,” he said

“Being recognised is just a nice bonus really, it just means I’m getting older!”

Dr Kirwan moved to Woori Yallock in 1986, having previously worked in Glen Waverley, at St Vincent’s Hospital and the Royal Children’s Hospital as well as receiving obstetric training overseas. He made use of this training, delivering babies until he was 40 before it became too disruptive to be working at the centre before heading off to deliver a child.

Dr Kirwan said a lot has changed since those days.

“Back then we had Yarra Junction hospital working and I also delivered at Warburton and Lilydale but they’ve all closed now and some have turned into nursing homes,” he said.

“I used to admit patients and was the president at Yarra Junction Hospital until it shut in 1990, and nowadays we refer patients down to bigger hospitals, not enough people had private cover back then for it and we couldn’t get specialists to come out.”

Dr Kirwan has been based in the same office at the Woori Yallock Medical Centre for almost 30 years, following a small move across Healesville-Koo Wee Rup Rd in the early 90’s.

Dr Kirwan said he had customers tell him they appreciate the value of an ‘old-fashioned surgery’ and it’s very important for rural communities to have a consistent medical presence.

“Not too many doctors want to move out away from facilities, for communities where they’re more isolated, it’s much more difficult to get access to doctors as easily, even with incentives.”

“There’s still not enough doctors in some communities and it is more difficult, but healthcare is important.”

Winners of the 2022 Victorian Rural Health Awards were announced at the 17th Virtual Gala Awards on Thursday 16 June, with award-winning comedian and rural Victorian Geraldine Hickey the MC for the event.

Dr Kirwan said he has enjoyed his time in Woori Yallock and the relationships he has formed over the years.

“It’s been a privilege to deliver babies and then they come back and have babies of their own, or generations of families coming through, they’ve become friends as well as patients. Some of them have been coming to the end of their time as well and are dying, so it can be quite emotional,” he said.

“I feel a part of the community and like I’ve been fully accepted by the locals, especially with the well-established families who have been here as far back as the 1800s, and to have been able to be involved with the local football club, having played tennis locally and in other community activities.”

ABOUT THE VICTORIAN RURAL HEALTH AWARDS:

The Victorian Rural Health Awards (VRHA), hosted since 2005 by the Rural Workforce Agency Victoria (RWAV) with the support of the Victorian Department of Health, recognise and honour the outstanding contributions made by the exceptional medical professionals, nurses, allied health professionals, Aboriginal health workers and practice managers working across regional and rural Victoria.

The Length of Service Award honours GPs who have spent the past 35 years or more providing exceptional health care to the people of remote, rural and regional VIC. The service can be cumulative or consecutive, and GPs who are currently practising or have been working for 35 or more years in rural VIC (RA2-5 or MMM2-7) are eligible.

mailcommunity.com.au is the online portal for Star Mail with local content relevant to the communities served across the Yarra Valley, the Dandenong Ranges and throughout suburbs in the foothills such as Wandin North, Wandin East, Mooroolbark, Montrose, Lilydale and Kilsyth. Coverage also extends through parts of Cardinia Shire and Knox City.

The Upper Yarra Star Mail covers all things along the Warburton Highway and beyond. The area includes Warburton, Woori Yallock and Yarra Junction as well as outer lying towns including Gladysdale and Big Pat’s Creek. The Upper Yarra region boasts a stable residential population of families and those seeking a tree change, as well as a regular influx of international tourists and Melbourne locals enjoying weekend getaways to create a strong community brought together by a mutual appreciation of the tranquil location of lush mountain forests and river valleys.